Deprecated: The each() function is deprecated. This message will be suppressed on further calls in /home/icad9e4/public_html/icad2018/wp-content/plugins/js_composer/include/classes/core/class-vc-mapper.php on line 111
 Venue and Travel – ICAD2018

From its humble beginning as a training school for mining engineers, Michigan Technological University has grown into a leading public research university and a key educational partner within the state of Michigan, the nation, and beyond. Michigan Tech maintains an enrollment of about 7,000 undergraduate and graduate students from around the world offering 38 MS and 27 PhD degree programs in topics from Computer Science to Applied Cognitive Science and Human Factors and Integrative Physiology. Michigan Tech is ranked in the top tier of national universities according to U.S. News & World Report’s “America’s Best Colleges 2018.” The student-faculty ratio is 13:1 and 49% of classes have fewer than 20 students. The university values cross-disciplinary faculty and student contributions to global sustainability. Michigan Tech’s mission is to lead as a global technological university that inspires students, advances knowledge, and innovates to create a sustainable, just, and prosperous world.

The Keweenaw Peninsula is the northernmost part of Michigan’s Upper Peninsula, projecting out into Lake Superior. This area is also widely know as the Copper Country, because of the native copper that was found in abundance in this region. The area’s current cities and villages were settled primarily as mining locations and commercial ports that serviced mining activities throughout the late 1800s and most of the twentieth century. Today, the region’s economy is driven by services, forestry, tourism and recreation, and technology. The Keweenaw is known for its cool climate and snowy winters that afford spectacular winter activities and for the Lake Superior’s forests and beaches that beckon the summer vacationer. The ecology is diverse hosting a variety of relatively rare and iconic mammal species including the timberwolf, the moose, the fisher, an abundant black bear population, and the occasional cougar passing through. It also has a rich ethnic heritage which today is represented primarily by the Finnish influence. The Keweenaw National Historical Park, with heritage sites throughout the region, tells the cultural history of the region well. Communities like Calumet, Eagle River, Eagle Harbor, and Copper Harbor offer beautiful beaches, recreational trails, and historic village centers with shops and restaurants to explore.

Houghton is a very walkable city.  Should you prefer to rent a car, there are several options including, National Car Rentals, Alamo Car Rentals, Zip Car and Lyft.

Details: Includes breakfast and located one mile from conference. A block of 40 rooms were reserved and will be available until Tuesday, May 29, 2018. Mention the ICAD conference and receive a 10% discount. Please book by calling the Super 8 of Houghton directly +1-906-482-2240. Online reservation is not possible because they blocked the room for ICAD. 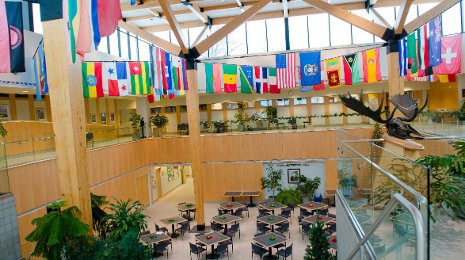